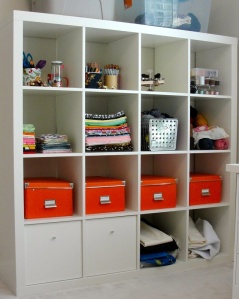 I have to admit that I’ve been pretty much set up with my new studio since the end of June, but still working on the finishing touches. But since I’ll soon be refocusing my attention to the nursery, I thought I should share and cross this off my list.

I decided that I would commandeer this spare bedroom as my own as soon as we bought the house. I was stuffed down in the basement in Wisconsin and I hated being down there even though it was a walk out with great windows to the back yard. I was far away from the rest of the house and it was cold down there! This room is the smallest of the bedrooms, so it is quite cozy while still giving me plenty of room to spread out. I love the giant window that looks out over the trees in the front of the house. My one complaint is that we have carpeting -white!!- in here and I am paranoid about spilling on it. Shawn seems to think it is only a matter of time, but so far so good!

We went to IKEA and purchased some EXPEDIT shelving units, parts to make a desk/worktable from the VIKA system, and a BEDDINGE sofa bed. Shawn was AMAZING at helping me with the assembly. It was actually pretty easy with the both of us working together. Score another one for Team Colley!

I decided to keep it simple and go with white for the furniture, I knew that all of my supplies and accessories would give the room enough pop and I didn’t want it overwhelming. I kind of wish that I would have painted the walls – they’re the original off-white from when we moved in- but I think that once I get more up on them I won’t mind so much.

So that’s it, Widdershins has finally found an official home. I am so happy and excited to have my own special space to create. It’s really a dream come true.