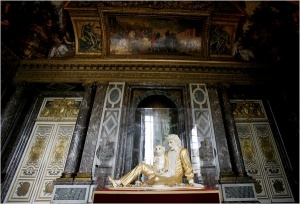 I need to fly to Paris this fall. Forget the Eiffel Tower, The Moulin Rouge, sidewalk cafes, and the brie. (Ok, maybe not the brie.) The reason I need to go is to see this exhibition of Jeff Koons’ work at the Chateau de Versailles. For those of you who did not take French. This is the royal palace of Louis XIV, “The Sun King”, and is known for its ornate decoration and a is considered by the country as a symbol of French royalty and a cultural treasure.
I love the idea of the juxtaposition between Koons’ works and the surrounding decor of the palace. Koons’ is known as the “king of kitsch” with works including large-scale sculptures based on balloon animals, blow-up pool toys, and assemblages of vacuums. Image his “Michael Jackson and Bubbles” sculpture surrounded by the gilded, rococo style of the Venus Salon and his “Lobster” sculpture hanging next to the ornate crystal chandeliers. . .

Being France, of course there is some opposition to the exhibit. Several dozen people demonstrated outside the palace gates, a protest organized by the National Union of Writers of France, a little-known, right-wing group dedicated to artistic purity in France.
The exhibition “strikes at the heart of a civilization” and “is an outrage to Marie Antoinette,” said Arnaud-Aaron Upinsky, the group’s chairman.

I would love to think about how Marie Antoinette would feel about seeing a giant assemblage of vacuum cleaners among portraits of royal women in the queen’s antechamber.