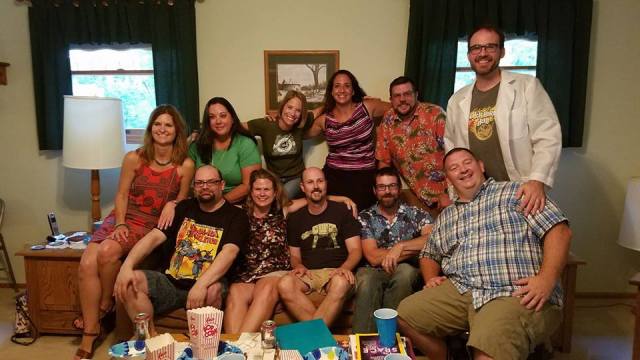 I’ve been mulling over the events of last Saturday in an effort to find words that can convey the joy that filled my heart that day. It was a  day of time travel, tears of laughter, the warmest of hugs, and analog video.

So, some back ground information its needed to fully comprehend the significance of this day. First, our class never has had an official high-school reunion. This, along with a myriad of reasons, caused many of us to lose touch. Thankfully, Facebook was borne into this world and I was able to re-connect (however odd that social media connection might be) to many of the class of ’93. Second, one particular group of friends were wonderfully  creative  and made movies on what is now looked on as archaic video equipment that Hipsters of today would chop off their man-buns to get their hands on. Yes, in 1993 we were the geeky group making videos, but I prefer to believe that we were just ahead of our time. (cough, cough)

Fast forward 25 years and it was decided to celebrate this wonderful cinematic silver anniversary and have a viewing party. All original players were invited, a viewing would take place, and there would be much rejoicing.

I’m not going to lie, I was a nervous wreck heading there. Driving from Grand Rapids, I had three hours to obsess over seeing people I haven’t seen in literally a quarter of a century. Insecurities ticked away with the miles . . . reminding me that I no longer look like my 18 self. But when that door opened and I walked to that room, all of that completely left me. There was no room in my brain. All I could take in was the warm comforting love from so many people that, although I have not been with in many years, my heart remembered and cherished. We were reunited, and it felt so good. There were a few people present that I knew for all of my childhood. One going back as far as second grade. It is a blessing to be able to see them, hear their laughs, reminisce and remember. I am truly grateful for that day, and hope that we keep our promises the we will not wait until our Golden Anniversary to see each other again.