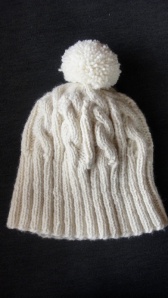 The hubby recently asked me to knit him a hat like the one he saw on some website. It was a basic cable-knit hat, so I thought that I’d be able to find a pattern for it. After a little searching on Ravelry, I found the Irish Hiking Hat . I decided to do a test run of the pattern before going to work on Shawn’s, so I picked up some Plymouth Encore Worsted that I had in my stash to see what I could do. I decided to double the yarn to give it a chunky, Irish sweater look. I feel like it turned out pretty well, except for the finishing on the crown came up to a little point – or like a nipple according to hubs- so I covered it up by adding a pom pom. I think that the pom makes it look like an old school ski hat. What do you think?